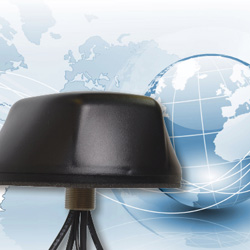 Schiller Park, IL, October 6, 2013 – Mobile Mark’s LTM series antennas were introduced in early 2013 and have received rave reviews for performance and aesthetics. The recently released models stand out because the cellular element is broadbanded enough to cover all LTE frequencies worldwide from 700 MHz to 3700 MHz.

These 5-cable antennas are designed for wireless applications that combine an LTE MIMO modem with a WiFi MIMO modem and a GPS receiver. This combination requires five separate antenna elements: two for LTE, two for WiFi, and one for GPS. Until the LTM Series antennas were introduced, many wireless systems integrators using this combination had to install multiple antennas. But with the LTM series all five high-efficiency antennas are combined in one compact, surface-mount radome.

Measuring 5.5 inches (140mm) in diameter with a low profile of 2.4 inches (61mm), the LTM series antennas take up significantly less space than multiple antennas and cut down on installation time and costs by offering a single mounting hole.