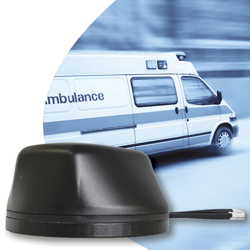 These mag mount antennas are designed for the latest generation of MIMO (multiple-input-multiple-output modems. MIMO modems offer greater speed and capacity than earlier generations of modems. They achieve this by sending RF signals on multiple antenna elements to maximize the amount of information transmitted and received. In order to ensure optimal performance, the MIMO system needs multiple antennas on both the transmit and receive ends.

The LTM Series Surface-mount antenna mount to a flat surface with a center fed base bolt. The MLTM Series contains a powerful magnet base. The cable connections on the MLTM Series are over-molded for a completely weatherproof finish. The antenna is rate IP67 for strict water and dust ingress standards.

MLTM301 & MLTM302 Series
The 3-cable versions of the mag-mounts cover two Cellular/LTE elements as well as a GPS element. This is designed for modems that offer Cellular/LTE MIMO (Multiple-Input-Multiple-Output) as well as GPS. Both models cover LTE at 700 MHz, the “302” series also covers data applications up to 3.7 GHz.

MLTM501 & MLTM502 Series
The 5-cable versions of the mag-mounts offer MIMO on both Cellular/LTE and WiFi for the most efficient data transfer available. The antennas contain two Cellular/LTE elements, two WiFi elements and a single GPS element. Both the “501” and the “502” models cover LTE at 700 MHz, the “502” series also covers data applications up to 3.7 GHz. The WiFi coverage is on both 2.4 & 5 GHz.